When a company is lucky enough to have a champion of international solidarity in its customer base, it can make only one choice: to support it. 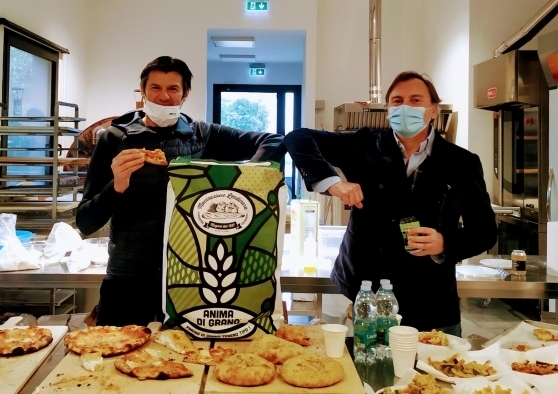 Giampaolo Bendinelli is a fourth generation baker: The “Panearte” oven in Lugagnano di Sona (Vr) has been in operation since 1893 and for decades our mill has had the honor of serving the Bendinelli family
with our flour for bread making.

But Bendinelli is not only a skilled and expert artisan of white art: his name is known to all fans of Triathlon, or rather, of its highest expression, the Ironman.

The Ironman is the definition used by Ironman Inc., the company that owns the registered trademark, to indicate one of the standard distances of triathlon, a sport characterized by a set of three disciplines, swimming, cycling and running.

Defined by the World Triathlon as super long triathlon distance, it is the toughest competition in this sport, characterized by 3.86 km of swimming, 180.260 km of cycling and 42.195 km of running (i.e. the distance of the marathon).

Our super baker, however, does not stop at Ironman but goes further, participating in Ultra Ironman competitions that take place in different parts of the world: the last one he joined is the “Swisseultra” Deca-Ironman Ultratriathlon, held in Switzerland between on 22 and 31 August 2020: a ten-day test, in which the athletes covered a total of distances of about 40 kilometers by swimming, 1,800 kilometers by bicycle and over 420 kilometers of running.

Next stop in June, in the North American state of Oregon, where Bendinelli will participate in the Double Ironman supported by our company: 7.6 km of open water swimming, 360 km of cycling and 84 km of non-stop running.

Why is Bendinelli committed to these extraordinary athletic trials?
The answer is in two words: passion and solidarity.

Since he started with competitions, Giampaolo never fails to proudly show the shirt of Abeo, the Association of Child Hemopathic Oncology of Verona. Part of its efforts is concentrated precisely to give visibility and raise funds to support the young cancer patients assisted by Abeo.

In addition to this, our champion is also deployed in the battle against ALS, Amyotrophic Lateral Sclerosis, a degenerative disease that unfortunately struck the marathon runner friend Cristiano Gigli. To give his partner the opportunity to experience the emotions of the marathon again and raise funds for the fight against ALS, Bendinelli together with other athletes invented the event “Thanks Cristiano – Best I can”. To date, a half marathon in Verona and a marathon in Rome are planned where the participants, in turn, will run pushing the “bolide”, a special means of transport that will also allow Gigli to participate in the competition. Just in view of this special event, on May 26th Cristiano Gigli and all the athletes who will run with him have been invited by Pope Francis in a private audience.

Our company has chosen to be alongside Giampaolo Bendinelli, both to accompany him in his extraordinary sporting achievements, and to support him in raising funds for Abeo and Asla, the Amyotrophic Lateral Sclerosis Association.

For those who want to help us support these two realities: